May 2017Alice returns for another Adventure Underground

The Olivier nominated immersive spectacular, Alice’s Adventures Underground, has returned to The Vaults for a limited run and has yet again been nominated for awards – this time for Entertainment Project of the Year in the AV Awards  and for Best us of AV and Best Projection Mapping in the Event Tech Awards.

The show is conceived by Les Enfants Terribles and of course based on the famous Lewis Carroll novel however Anthony Spargo and Oliver Lansley have written a whole new layer into the story with lashings of mystery, magic and revolutionary undertones and a neat twist at the end. 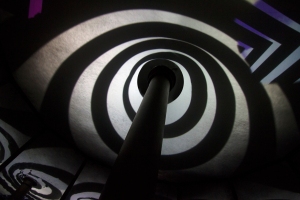 Samuel Wyer’s design is obsessively and beautifully realised and it was an immense pleasure working with him and the team of directors – including Oli Lansley, James Seager and Joe Hufton – once again to create some unexpected and magical moments using my tools to be discovered along the way.

The video design is integral to the piece, providing both narrative and spectacle alongside Tomas Gisby’s sound and composition.

It’s hard for photos to do justice to the experience of being lost in Wonderland and walking in Alice’s shoes: this show really had to be seen to be believed so I’m delighted at its return.

Here are some mentions from the press to whet the appetite:

There are gorgeous puppets, operated with real skill by the cast, and the production also makes stunning use of projections. The world they have created is sensual and touchably real, with playful details to delight you at every turn.

We met a huge caterpillar in a tent, who recreated the story of how Alice came to be in Wonderland through the use of stunning visual projections.

My team this year consisted of: