Painting with light – The Seven Acts of Mercy, RSC

Anders Lustgarten’s newest play has seen its world premiere in the Swan Theatre in Stratford. The commission – part of the Shakespeare 400 celebrations – is sensitively directed by Erica Whyman and designed by Tom Piper with projection design by Nina Dunn.

“The Seven Acts of Mercy” spans 410 years, set in 1607 in Naples and modern day Liverpool and is a visceral story dealing with the enduring themes of art, violence, compassion and poverty.

Caravaggio was known for his dramatic use of light and Charles Balfour conjured the same magic with his lighting of the play, which was complemented by the projected images of his evolving masterpiece and past works both on a framed screen (made to the actual dimensions of the 7 Acts work) and onto the surrounding gauzes and moving canvas within Tom Piper’s design. The set is a lofty scaffold, designed cleverly to have the ability to look at once unforgivingly modern and delicately ancient. Paint-spattered floorboards complete the visual story.

The radical-minded Lustgarten has spliced his recreation of the painting process – finely achieved via projections in Erica Whyman’s beautifully lit production – with a sizeably populated portrait of modern-day Merseyside. 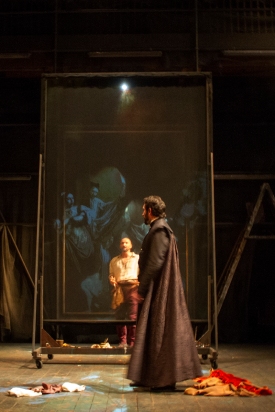